“My go-to is the Mop Jig,” shared Murphy, noting that he used the lure extensively to win the 2011 FLW Rookie of the Year title – when he chose to buy and use Buckeye Lures because he believed in them.

The 35-year-old contractor from Nicholasville, Kentucky expects the unique jig to work well again on this year’s FLW Tour. “I’m looking at Chickamauga, Eufaula, and a couple of other places with a good ledge bite and I just can’t wait to get out there with the Mop Jig. That’s definitely my money-making lure!”

By ‘ledge bite’ Murphy doesn’t always mean ‘deep bite’. “I have caught bass on it in 3 feet of water. I’ve also caught them in 45 feet of water with it.”

What makes the Mop Jig so productive? “The skirt. It looks like it has a breeze blowing across it all the time. It just keeps waving.”

Though Murphy chuckles at the occasional 8-incher that will attack the lure, the Mop Jig is a big bait for big bass and he dresses it accordingly. “For a trailer, I like either a big brush hog or a Strike King Rage Craw.”

If the jig bite slows, Murphy can often get the fish fired up again by swimming a soft plastic lure on a J-Will Swimbait head.

Of course, there are times when Murphy has to check-down to his numbers bait. “When we go to Smith or Beaver Lake, that Spot Remover is the deal.”

When conditions call for an aggressive approach (Lake Toho and the Potomac River come to mind) "Buckeye makes a great buzzbait," said Murphy.

“Shawn is a great fisherman,” said Jeremy Altman of Buckeye Lures, “and he used Buckeye Lures anyway - even before we signed a deal with him - which says a lot about his commitment to the product line. When we decided to add to our pro staff, Shawn was a natural choice.”

Explore the classic, Tour-tested Buckeye lures, as well as the newest product offerings at BuckeyeLures.com.

And follow Shawn Murphy and his fellow Tour pros on AnglersChannel.com and the Progressive Bass Wrap Up TV Show. 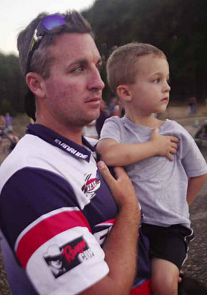